B GRADE FOR ‘TURTLES’: WHAT CINEMASCORES MEAN AND WHY EXIT POLLING MATTERS

This weekend, Paramount’s Teenage Mutant Ninja Turtles is opening strong with a possible $65M+ three-day haul … and a B CinemaScore. Meanwhile, The Hundred-Foot Journey is opening in fourth place — but with an A CinemaScore from its core audience. And last week, CinemaScore began putting its scores out on Twitter and Facebook (via Denver-based Social Media Energy). In other words, after the exit polls, audiences around the country now will be able to see a film’s CinemaScore, telling the world what its core audience thought of the film on Friday night. In a tweet.

If you look at the breakdowns — and this was notprovided to Deadline by CinemaScore — Turtlesgarnered an A from moviegoers under 18 and a C+ from the 25- to 35-year-olds who grew up watching the Turtles on Saturday morning cartoons years ago. For those under 25 (which made up 45% of the audience), the film garnered an A-, and moviegoers 25 and older gave it a B-. Before your eyes glaze over from too many numbers, when you take in all facets of the core opening-night audience for Teenage Mutant Ninja Turtles, overall it received a B.

So what does it all mean?

The-Hundred-Foot-Journey-Movie-Wallpapers_FotorEvery weekend, box-office reports across the country refer to a movie’s CinemaScore. If a picture gets an A+, it is touted by distributors and filmmakers alike, but if it gets a C+, the hand-wringing begins. An F? It might as well stand for “Forget it.” Exit polling — whether it’s CinemaScore or a competitor like PostTrak — is an important indicator of how a movie might do long-term. It can predict what kind of multiple the film can expect. A multiple is determined by how many times its opening weekend number it might do (i.e., if the picture opened to $20M and ends up at $80M, it registers a 4 multiple).

“The common misperception is that exit polling merely represents a passive ‘rearview mirror’ look at how movies were received by the moviegoing public,” says Paul Dergarabidian, senior media analyst at Rentrak. “In reality, comprehensive exit polling … offers studios actionable future intelligence, which can be predictive of a film’s longevity or be used for advanced demographic planning of upcoming releases.”

As one industry observer put it: “(A CinemaScore) indicates that people either like the film or they don’t, but it doesn’t mean that they won’t go to the film.” True. For instance, Shutter Island received a C+ CinemaScore, but with Leonardo DiCaprio in starring the lead, the Martin Scorsese film ended up with a 3.1 multiple. In other words, having opened at $41M, it ended its run at $128M. More recently, the Scarlett Johansson actioner Lucy had a C+ CinemaScore and ended up taking about a 60% fall in its second weekend.

“Even though the people will go to the film, which is opened by marketing, it doesn’t mean they will continue going … and the exit polling speaks directly to the multiple,” said the observer. The Hundred-Foot Journey, with A’s all the way down the line — it got A+’s from the audiences aged 25 to 49 — should end up with a better multiple (see chart).

How to Train Your Dragon 2 received an A CinemaScore, and its multiple is currently running about 3.4, while The Counselor received a D CinemaScore last year and ended up with a multiple of only 2.1. So you can see the drop-off. When you look, historically, at the data, a clear picture emerges.

CinemaScore, operated by father-son team Ed and Harold Mintz, has a great amount of historical data to work with. They have been at it for more than 35 years. It has a smaller sample size than, say, PostTrak (which is a much broader reach), but its results are a very good indication of what kind of multiple the film ultimately will pull in.

As one head of distribution noted: “The CinemaScore shows likability and playability and length of the film’s ride. It’s not always right, but it’s a pretty good indicator. I rely on it.” Others like PostTrak. Said one: “CinemaScore had its place, but we have a much better tool now called PostTrak, where the sample is twice as much and much broader. I find it more thorough and in-depth.”

However, another distributor noted that CinemaScore “is always right in line with our own exit polling.” Regardless of what kind of exit polling service they use, it shows the importance studios place on opinions from opening-night audiences.

So what is the methodology? What do the survey cards look like and why? How do they pick the theaters? Deadline asked CinemaScore to raise the curtain a bit so our readers can understand the methods behind exit polling and what kind of information the studios are looking for.

“It all started in 1978,” Ed Mintz said. “There was a discussion with people about why do we see critics’ opinions but not moviegoers? It took us eight years to get the final ballot that we use now. We made a little modification in 1986 on the ages. And then the studios wanted us to ask certain questions — if they would buy DVDs and then Blu-ray — and then that takes us to today. We changed it based on what the studios needed to know, but the overall structure remained the same.”

Each moviegoer gets only one CinemaScore ballot to ensure that the same person isn’t filling out numerous ballots to skew the results. There are 35 to 45 pollster teams across the country in 25 cities at any one time that are coordinated by CinemaScore to make sure all the opening movies are covered. Those pollsters randomly choose five theaters in five cities (one theater in each city) to get to an ultimate goal of 400 to 600 ballots. Asked about the small sample size, Ed Mintz said the margin of error is only 6% on 300 ballots. The Mintz family leaves it up to the pollsters to choose a theater that is playing the film. When they are finished collecting the survey cards from the audience members, they inform CinemaScore which theaters and films they have polled, and CinemaScore, in turn, lets the studios know.

They also only poll on films opening on 1,500 screens or more. “We are not influenced by anyone or told what theater to poll because we don’t want the survey stacked with people at a certain theater,” said Ed Mintz. “Otherwise, it could blow the whole system.” And how many of those attendees at the movies fill out the ballots? 65%, according to Mintz.

And which cities? It’s 25 of the biggest in the country, including Los Angeles, New York, Chicago, Denver, Dallas, Portland, St. Louis, Atlanta, Tampa, Philadelphia and Memphis.

“We consider our polling teams like families,” said Harold Mintz, who has quite impressively never missed giving the studios numbers on opening weekends in 35 years. In fact, he told Deadline, there was one weekend — and he knew the date (October 24, 2008) — where his wife had to get heart surgery. The entire CinemaScore team was in the hospital waiting room working on laptops to make sure the studios got the grades.

The sample paper ballots are collected and go to a coding system; the results are sent to Las Vegas via phone and computer. After the compute spits out the results, the CinemaScore team posts the overall score online. The detailed results are then sent directly to the studios so they can use the information to see how a movie performed and perhaps how to tweak its marketing going forward.

Harold Mintz is tasked with projecting opening numbers for the final box office to the distribs. “A movie with a C+ CinemaScore, generally speaking, tends to collapse pretty quickly.” Again, there are exceptions to the rule. For instance, Vanilla Sky got a (gulp) D CinemaScore but did better than expected. The Cameron Crowe-directed 2001 film starring Tom Cruise and Cameron Diaz opened to $25M and did a 4 multiple. Thanks, Mr. Cruise.

Various other factors can influence a CinemaScore too. For instance, the Melissa McCarthy comedy Tammy – which every critic loved to hate — had a C+ CinemaScore, but its multiple carried on because of its demos. It played heavily female, 24% of the audience was over 50, and 50% of the audience was over 35. If there is an older female demo, those films tend to play a bit longer. But for male-driven films, the opening weekend is what you see is what you get. With thCinemaScore also uses an algorithm that places values on each grade and then grades on a curve up or down depending on the values given. So when The Devil Inside opened with an F CinemaScore in 2012 (by the way, the micro-budgeted film ended up being very profitable), Paramount openly challenged the grade. But true to form, on its second weekend, the horror film took a big percentage blow — a whopping 76%.

So you gotta wonder: How many films have gotten an F in the past 10 years? Eleven — the most recent being Killing Them Softly, starring Brad Pitt from The Weinstein Co. It opened to $6.8M and went onto to gross $15M — a 2.2 multiple. Imagine what it would have been like without Pitt as its star.at logic, The Hundred-Foot Journey, which has a very strong older-female audience, should have fairly good word-of-mouth and a better multiple. 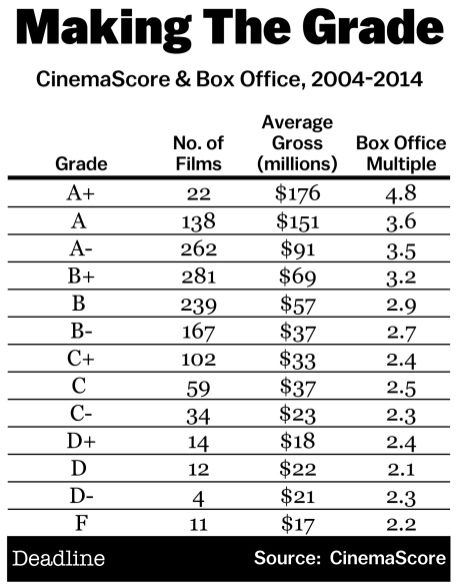